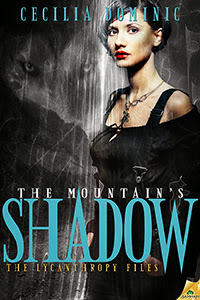 Today I’m interviewing CECILIA DOMINIC. Her book, The Mountain's Shadow is an urban fantasy and was released on October 1st.


To start us off, please Share three fun facts about you that most people don’t know.


1)  I've always wanted to be an actress. I actually dream about being in movies or television shows, where of course I know my lines unless I don't and I'm in the middle of the set naked, but that's an answer to a different question. My only acting experience came in grade school and high school, but I loved being able to deliver entertainment with immediate feedback. It's in my blood – my maternal grandparents acted, as did my maternal godmother. She and her ex-husband ran a community theater in Belgium for many years. My grandfather wrote for television.
2) I'm actually not the calm, collected person I project. My patients often tell me, "oh, wow, I bet you're never stressed," usually after I teach them some sort of relaxation technique. One of the best parts of my day job as a psychologist is regular relaxation exercise practice because I need it. I probably handle my stress okay unless I'm really tired or sick or hungry or any of the other reasons we humans become more susceptible to experiencing negative emotions, but I wouldn't say I have less than anyone else. Having my own practice and now a writing career won't allow a stress-free existence, but it's totally worth it.
3) Sometimes I think about running for public office. Yes, this one shocks me, too. I suspect I'd have difficulty playing politics and refraining from telling the other politicians how stupid they're being.
Please tell my readers a little bit about your book.
The Mountain's Shadow is set primarily in a fictional town in the Ozark Mountains and features Joanie Fisher, a public health researcher who is chasing down the origin of the new hot behavioral disorder in children so the company she works for can develop a cure. Unfortunately, her lab burns down, and she gets fired from her job. She inherits her grandfather's estate in the Ozarks, but there are suspicious circumstances surrounding the estate including the town's children disappearing at the full moon. There are werewolves, a little romance, and lots of yummy food descriptions.

Describe the genre of this particular title, and is the only genre you write in?
This is an urban fantasy, which traditionally features an urban setting with magical elements. The Mountain's Shadow pushes the genre a little because it's primarily a rural setting – so maybe it should be called suburban fantasy – and my werewolves have a scientific explanation behind them. Besides the usual werewolf tropes, I also bring in some old Scandinavian legends to give them some different abilities. This book was the first one I wrote. I primarily write urban fantasy, but I've written in other genres as well (see below).

When did you start writing toward publication?
I'd never seriously considered it until I was in graduate school, where we were pushed to write academic articles and chapters. If you've ever read an academic article, you know that objective, scientific language often translates to "dry and boring," and trust me, it can be as painful to write as it is to read. Chapters are a little better. I came across Writer's Digest magazine one day and was shocked to find that people could actually get paid for short stories. It was like the heavens opened up and a chorus of angels appeared singing, "you can get paid for your writing." Okay, maybe it wasn't that extreme, but it was shift in my thinking. I'd bought books before and knew authors got paid, but it had just not occurred to me that I could do it, too.

My first short story submission went to The Magazine of Fantasy & Science Fiction, which I had also found on that fateful trip to the bookstore. My then boyfriend, now husband, and I went out for fondue to celebrate what would surely be my first sale. Of course it got rejected, but I am nothing if not persistent. My first short story acceptance was when my fantasy mystery The Coral Temple won the 2011 Mystery Times Ten contest, sponsored by small publisher Buddhapuss Ink. I won a Kindle.
Did you have several manuscripts finished before you sold? If so, did you send them out yourself?
The Mountain's Shadow was my first book. When it was accepted, I was starting to pitch my YA historical paranormal The Golden Fox, which was my fourth completed manuscript. I was also writing a romantic suspense, which doesn’t have a good title yet. My second book was another urban fantasy, a subsequently very edited NaNoWriMo book from 2006. My third book is a meta-romance called A Perfect Man, which features a class of MFA students who are finding out that real life is, indeed, stranger than fiction. I pretty much wrote what interested me at the time and figured I would follow the path of whatever sold first. I'm glad it was an urban fantasy since I really like that genre.


I did all my submissions myself, which is probably why it took so long to get published. I would send out five to ten submissions to agents and small publishers, get a batch of rejections, and sulk for six to twelve months. To be fair, I had other things going on like starting a career, buying a house, getting licensed as a psychologist, and then starting a private practice.


Why have you become a published author?
As I mentioned earlier, I like to entertain and get feedback that people have enjoyed my work. I've also always been drawn to writing as a full-time career because I believe in doing what you love. I don't think I'll ever retire from it.
Having achieved your goal to be a published author, what is the most rewarding thing? Apparently my book makes people think and pay attention. Several reviewers have commented on how it's not possible to multitask while you read it because of the twists and turns. This shocked and amused me. I've always been the kind of reader who shuts everything out while immersed in a book, even to the point of annoying those around me (sorry, Mom!). If I can help people be more mindful in this chaotic, distracting world while entertaining them, it makes me happy both as an author and a psychologist.
What’s next for you?
I'm continuing to write the Lycanthropy Files series, and I recently submitted a proposal for the third one to my editor. The sequel to The Mountain's Shadow is called Long Shadows and will be out on March 25. Meanwhile, I'll keep writing and doing my Characters on the Couch series on my blog, and I'll definitely be drinking more wine and blogging about it on the Random Oenophile. I also have that first book in the other urban fantasy series almost ready for submission. Day job-wise, I hope to find another psychologist to join my practice. Behavioral sleep medicine is a growing field, and it would be great to have someone to share the clinical work.


BOOK BLURB
Some mistakes can literally come back to bite you.

First it was ADD. Then pediatric bipolar. Now the hot behavioral disorder in children is CLS, or Chronic Lycanthropy Syndrome. Public health researcher Joanie Fisher was closing in on the cause in hopes of finding a treatment until a lab fire and an affair with her boss left her without a job.

When her grandfather leaves her his multimillion-dollar estate in the Ozarks, though, she figures her luck is turning around. Except her inheritance comes with complications: town children who disappear during full moons, an irresistible butler, and a pack of werewolves who can’t seem to decide whether to frighten her or flirt with her.

Joanie’s research is the key to unraveling the mysteries of Wolfsbane Manor.  However, resuming her work means facing painful truths about her childhood, which could result in the loss of love, friendship, and the only true family she has left.

Warning: Some sexy scenes, although nothing explicit, and adult language. Also alcohol consumption and food descriptions that may wreck your diet.

MORE ABOUT THE AUTHOR
Cecilia Dominic wrote her first story when she was two years old and has always had a much more interesting life inside her head than outside of it. She became a clinical psychologist because she's fascinated by people and their stories, but she couldn't stop writing fiction. The first draft of her dissertation, while not fiction, was still criticized by her major professor for being written in too entertaining a style. She made it through graduate school and got her PhD, started her own practice, and by day, she helps people cure their insomnia without using medication. By night, she blogs about wine and writes fiction she hopes will keep her readers turning the pages all night. Yes, she recognizes the conflict of interest between her two careers, so she writes and blogs under a pen name.  She lives in Atlanta, Georgia with one husband and two cats, which, she's been told, is a good number of each.


How can my readers buy your book?

Readers can go to the publisher’s HOME PAGE
Amazon   Barnes and Noble
Find out more about Cecilia Dominic and her book
The Mountain's Shadow by visiting:
WEBSITE    Twitter    Facebook
Goodreads    Wine Blog
Posted by Nancy Lee Badger at 12:30 AM