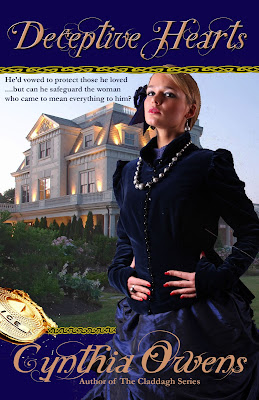 Cynthia Owens joins me to speak about herself and her latest release. Her book, Deceptive Hearts, is a historical romance and was released July 1st.

Please tell my readers a little bit about your book.

Deceptive Hearts is a poignant tale of class differences in old New York. Shane MacDermott is an ex-boxer, an officer with the Metropolitan Police Force, and a veteran of Thomas Francis Meagher’s Irish Brigade.  Lydia Daniels is a mysterious beauty who lives in a secluded mansion in Gramercy Park. Shane and Lydia meet in a squalid tenement in New York’s Five Points, and he’s immediately suspicious of her. Why is she there? Why is she approaching lovely young women and offering them employment at her home? Something is definitely not right, and Shane’s determined to find out what it is. As determined as Lydia is to protect her secret. Until a threat from outside forces her to seek Shane’s help.

Sounds interesting! Describe the genre of this particular title, and is the only genre you write in?
Deceptive Hearts is a historical romance set in Victorian-era New York City, in both genteel Gramercy Park and squalid Five Points. It’s a new setting for me, as my first two novels are set in Ireland and the third in Baltimore and Philadelphia, but the timeframe is basically the same. Since most of my heroes (and some of my heroines) are Irish, and there was tremendous turmoil in Ireland at this time, it’s ripe for stories. I love history – in particular Irish history – and I suspect I’ll be writing historicals for a long time.

When did you first consider yourself a writer, and when did you start writing toward publication?
I’ve always considered myself a writer. I’ve written stories from the time I was a little girl. When I was in the first grade, my teacher asked the class to write a sentence about Dick, Jane, and their dog, Spot. Well, I wrote one, all right…and then proceeded to write another, and another, until I eventually had about two paragraphs. I was so proud of what I’d done! Unfortunately, my teacher wasn’t as impressed. Instead of praising my efforts, she scolded me for writing too much! To this day, I wonder if my determination to succeed as a writer had something to do with this creativity-stifling teacher.

Wouldn't that make her blush! Back to basics...Is research a part of your writing? If so, where do you find the answers?
Research is a very big part of my writing. Particularly in a historical story, it’s important to get the facts right. As to where I go to get those facts…well, anywhere I can! I have an extensive research library that seems to be taking over my tiny office (or “creative corner,” as I like to call it) that spans subjects from Irish mythology to antique firearms to the fashions of the past.

The Internet is also a valuable resource, if used in the right way, and for me, that means sticking to the subject I’m researching and not getting side-tracked by all the other interesting topics I come across – not an easy task at times.

It also helps to visit my setting, which I discovered in July of 2009, when I finally realized my life-long dream of visiting Ireland. It was ten days of sheer magic, and I didn’t want to leave!
And recently, I connected on Facebook with someone who has become a very dear friend. An Irish historian, I call him my Research Hero, and I know I can go to him for just about any answers I need about Irish history.

Research is the key to historical romance. Will you share some encouraging words for authors still struggling for that first contract?
Never give up! Yes, I know it’s been said before, but it’s still true. If you don’t keep writing, submitting, and yes, collecting rejection letters, you may never receive that acceptance. Also, stay true to your own voice. Don’t try to imitate another writer’s style, no matter how much you may admire them. Write the story you want to write, the way you want to write it. Write from your heart.

Words to write by! Share three fun facts about you that most people don’t know.
I'm a collector. I have several collections, but my favorites are music boxes and postcards from the places I’ve been – or the places my friends have been.
2) I once took a fencing class. I wasn’t very good at it – okay, I’m a total klutz when it comes to sports – but I wanted to get a feel for fencing, just in case I ever wrote a hero who needed to know swordplay. To this day, none of my heroes has ever handled a sword.
3) I once fancied myself a female Andrew Lloyd Weber. I even wrote a musical (using music from the Big Band era) set in WWII Paris. Of course, it wasn’t very good, but it was fun, and it was also a learning experience.

What’s next for you?
Keeper of the Light, Book II of The Wild Geese Series, will be published by Highland Press! No release date yet, but I’ll keep everyone posted.

Cathal Donnelly is one of Shane MacDermott’s best friends. This handsome, mercurial storyteller has...shall we say...well, let's call them Fenian leanings, to use an Irish expression. There's something big coming up in the Fenian community, and you can bet Cathal is eager to be a part of it.

But...something goes wrong, and he finds himself on an island in the middle of the Atlantic Ocean, with no memory of who he is, where he came from, or why he was in a boat that capsized in a wild Atlantic sea storm. The only thing he knows is that he's desperately attracted to his beautiful rescuer...even though she's as English as the British soldiers who drove Cathal and his family from Ireland's green shores during the famine.

BOOK BLURB
…Like the Wild Geese of Old Ireland, five boys grew to manhood despite hunger, war, and the mean streets of New York…
He survived war, and returned to devastation

A hero of the Irish Brigade, Shane MacDermott returned home to New York to find his family decimated and his world shattered.

She risks her life to save the people she loves
Lydia Daniels will risk anything to protect the women she shelters beneath the roof of her elegant Gramercy Park mansion—even if she has to trust the one man who can destroy her.

Shane and Lydia both harbor secrets that could destroy them – and put their lives in jeopardy. Can their love overcome their carefully guarded deceptive hearts?

A little bit about the author

I believe I was destined to be interested in history. One of my distant ancestors, Thomas Aubert, reportedly sailed up the St. Lawrence River to discover Canada some 26 years before Jacques Cartier’s 1534 voyage. Another relative was a 17th Century “King’s Girl,” one of a group of young unmarried girls sent to New France (now the province of  Quebec) as brides for the habitants (settlers) there.

My passion for reading made me long to write books like the ones I enjoyed, and I tried penning sequels to my favorite Nancy Drew mysteries. Later, fancying myself a female version of Andrew Lloyd Weber, I drafted a musical set in Paris during WWII.

A former journalist and lifelong Celtophile, I enjoyed a previous career as a reporter/editor for a small chain of community newspapers before returning to my first love, romantic fiction. My stories usually include an Irish setting, hero or heroine, and sometimes all three. I'm the author of The Claddagh Series, historical romances set in Ireland and beyond. The first three books in The Claddagh Series, In Sunshine or in Shadow, Coming Home, and Playing For Keeps, are all available from Highland Press. Deceptive Hearts, the first book in The Wild Geese Series, has just been released, and Book II, Keeper of the Light,will soon be released from Highland Press.

I am a member of the Romance Writers of America, Hearts Through History Romance Writers, and Celtic Hearts Romance Writers. A lifelong resident of Montreal, Canada, I still live there with my own Celtic hero and our two teenaged children.


How can my readers buy your book?
Amazon   Barnes and Noble   Smashwords