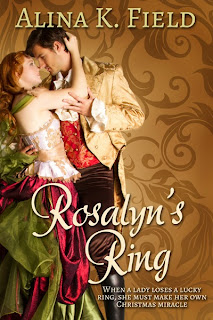 Author Alina K. Field stopped by to answer a few personal questions. Her book, Rosalyn’s Ring is a Regency novella and was released July 24, 2013.


Please tell my readers a little bit about your book.
Thanks Nancy for the opportunity to chat with you today. Rosalyn’s Ring tells the story of an impoverished noblewoman who seizes an opportunity to help another young woman and to recover her father’s stolen signet ring. She braves a precarious Christmas Eve snow storm, meets a mysterious nobleman, recovers the ring and loses it again, and uncovers a secret that changes her life. And, oh yes, she finds love!

I need a good night's sleep and two cups of coffee before I write. What is your writing routine like?
I’m a morning writer, but with enough caffeine, I can go all day. I tend to do better in a quiet setting, but I once put out over 30,000 words in thirty days in a thirty foot motor home with my husband sitting across the table from me and the financial news blaring over my head. I considered that quite an achievement!
I’m not a pantser, but not a detailed plotter either. So far, what works best for me is to decide upon the characters, the main conflict, and the turning points of the story, and then launch into a fast draft. I say “so far” because I’m always looking for a better way.

Can I assume a story set in the regency period requires research? Is research a part of your writing? If so, where do you find the answers?
Yes, research always plays a part in my writing, and I almost always start with the internet. Rosalyn’s Ring touches on the historical practice of wife sales in England. I started with Wikipedia, and from there went to referenced sources, Wives for Sale, An Ethnographic Study of British Popular Divorce, by Samuel Pyeatt Menefee, and Customs in Common, by E.B. Thompson.  For other historical questions, I relied on various online sources, but it was difficult at times to pin down certain critical details. My apologies in advance to readers for anything I got wrong—all historical errors are mine!

We are writing fiction y'all...  Are you a member of any writing organizations and, if so, have they helped?
Thank heavens for Romance Writers of America and the tremendous supportive network of writers I’ve found there. I’m active in two local chapters, East Valley Authors and the Orange County Chapter, and in the last year I joined two specialty online chapters, Celtic Hearts and Beau Monde.  How have they helped me? Let me count the ways: positive role models, affordable education, networking, fellowship, and constant encouragement. I urge all writers of fiction to check out RWA.

The recent RWA Conference in Atlanta was inspiring. Will you share some encouraging words for authors still struggling for that first contract?
The best thing you can do is to keep writing, keep reading, and keep learning. Your craft will become stronger and you’ll find yourself with a body of work that will make you more marketable.  Believe it; I’ve seen it happen with my writer friends.

Share three fun facts about you that most people don’t know.
1)  I won first place in a college fencing (as in “sword-fighting”, not “chain-link”) tournament.
2)  I met my husband on an Immigration raid. He was a cop, I was a fed.
3)  I spent a number of years in plain clothes carrying a gun; I hated it. I’m not well-endowed enough to distract from the bulge of a shoulder holster. My hips are generous enough for a belt holster, but then, yipes, I had to wear a darn belt, and try dealing with the bathroom in that (ask a policewoman). And put it in my purse? Forgetaboutit; not only is that not a quick draw, imagine having your tube of lipstick pull the trigger accidentally!

BOOK BLURB
With her true inheritance lost, Rosalyn Montagu has reluctantly fallen into her elderly cousin’s tidy London life of do-gooder spinster. When a young woman from the district of Rosalyn’s childhood is put up for auction in a wife sale, Rosalyn seizes the chance to rescue her—and to recover a treasured family heirloom, her father’s signet ring, purloined by the woman’s innkeeper husband.

Intent on liberating the young wife with the money she has scraped together, Rosalyn braves a precarious Christmas Eve coach ride in the company of a mysterious nobleman. She soon finds she is not the only determined buyer attending the sale. Her rakish opponent not only succeeds in thwarting her purchase; he reveals himself as the man who took everything that should have been hers. Everything, that is, but her father’s ring, which she manages to recover before being tossed out of the inn into the snowy night.

The newly anointed Viscount Cathmore has accepted there is no way to avoid living his father’s dream of accession to a social class he disdains, but he has drawn the line at marrying a blue-blooded miss. Then he meets Rosalyn, a provoking beauty with an upper crust manner, a larcenous streak, and enough secrets to rouse even his jaded heart, including the truth of her identity—she is the woman whose home and inheritance he has usurped. But more mysteries swirl around Rosalyn’s lost inheritance, and Cathmore is just the man to help her uncover the truth.
Excerpt from Rosalyn’s Ring

Chapter One
Rosalyn Montagu had calculated there would be dangers on this increasingly madcap mission of mercy, but she never expected to be sitting in opposite seats from one them, and in his snug, well-appointed, private coach, too.
It put her at a disadvantage, it did. The weather, all grey sky and arctic wind with the smell of snow, had halted her public coach at the last staging inn. A private coach waited there for the two silent gentlemen who had joined them that morning, ready to carry the gentlemen onward to the Village of Glen Murray.
With as much dignity as she could muster, Rosalyn had begged a ride for her and her maid. After all, a woman’s future—her dignity, her safety, maybe even her life—were at stake, though Rosalyn did not feel compelled to share the particulars.
Lord Cathmore and Mr. Logan, they were. Not young, not old, for men. Possibly thirty, and both quite handsome. Lord and steward, or Lord and secretary perhaps.
Unfortunately, his lordship was silent no longer. After she and Nelly had settled on his cushioned seats, he had begun a polite campaign to get at those particulars.
“I live in London,” Rosalyn answered him, omitting the precise neighborhood, “with my mother’s elderly cousin. She was kind enough to take me in after my father’s death.”
﻿ It was only a small lie. Almost true. Her cousin and benefactor, Abigail Crompton, had died after Christmas last year. This would be Abigail’s first Yuletide spent underground, rolling probably, at the misuse of her monetary bequest.
Lord Cathmore raised only one wicked eyebrow.
A little bit about the author
Alina K. Field earned a Bachelor of Arts Degree in English and German literature, but she found her true passion in reading and writing romance. Though her roots are in the Midwest, after six very, very, very cold years in Chicago, she moved to Southern California and hasn’t looked back. She shares a midcentury home with her husband and a blue-eyed cat who conned his way in for dinner one day and decided the food was too good to leave.

You can find more information
about me, Alina K. Field,
and my book, Rosalyn’s Ring AT:
WEBSITE     TWITTER
Amazon Author Page

How can my readers buy your book?
AMAZON
Posted by Nancy Lee Badger at 12:00 AM