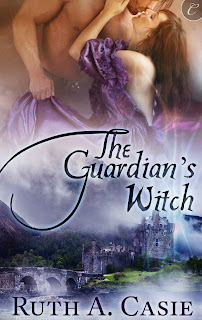 Today I’m interviewing Ruth A. Casie. Her book, The Guardian’s Witch is a historic fantasy and was released on July 1.

1)Paul and I love to ballroom dance. We’ve done it in every room of the house. 2)Working in international banking, I filled up my passport in two years.

3)One of my favorite places is a bench by the lighthouse at Pemaquid Point, ME
As a former New Englander, mine is on the rocks by the ubble Lighthouse in York, Maine. What’s next for you?For the immediate future I’ve also started a project with my critique partners. We’re writing a short story Christmas anthology that we will self-publish. I’m also working on follow up books to both Knight of Runes andThe Guardian’s Witch.

BOOK BLURB
England, 1290
Lord Alex Stelton can't resist a challenge, especially one with a prize like this: protect a castle on the Scottish border for a year, and it's his. Desperate for land of his own, he'll do anything to win the estate—even enter a proxy marriage to Lady Lisbeth Reynolds, the rumored witch who lives there.

Feared and scorned for her second sight, Lisbeth swore she'd never marry, but she is drawn to the handsome, confident Alex. She sees great love with him but fears what he would think of her gift and her visions of a traitor in their midst.

Despite his own vow never to fall in love, Alex can't get the alluring Lisbeth out of his mind and is driven to protect her when attacks begin on the border. But as her visions of danger intensify, Lisbeth knows it is she who must protect him. Realizing they'll secure their future only by facing the threat together, she must choose between keeping her magic a secret and losing the man she loves.
Excerpt from The Guardian's Witch
His soft breath heated something deep inside her when he brought his face closer to hers. Her heart thundered with anticipation. His firm lips kissed her eyelids and advanced to her ear. Mine, he whispered. A delicious shudder pulsed through her body. He marched on to her lips and coaxed them open. His spicy scent swept over her. He captured his prize and swept in with his tongue in victory. Forever echoed in her head.

She blinked and the haze vanished. A jumble of confused thoughts and feelings assaulted her. Once again she stared into his magnetic eyes. Her lips throbbed with hunger for his. She dropped her lashes to hide her confusion. A dream? A wish? She’d never had such visions. She gave herself a shake to rid herself of the final images.

A little bit about the author
Ruth A. Casie is a seasoned professional with more than 25 years of writing experience, but not necessarily writing romances. No, she’s been writing communication and marketing documents for a large corporation. Not too long ago, encouraged by her friends and family, she gave way to her inner muse, let her creative juices flow, and began writing a series of historical time-travel and historical fantasy romance novels. Her first release, KNIGHT OF RUNES finaled in NJRW’s Golden Heart for Best First Book. Her latest story, THE GUARDIAN’S WITCH, released July 1. Both books were published by Carina Press. When not writing you can find her home in Teaneck, New Jersey, reading, cooking, doing Sudoku and counted cross stitch.  Together with her husband Paul, they enjoy ballroom dancing and going to the theater.  Ruth and Paul have three grown children and two grandchildren.  They all thrive on spending time together.  It’s certainly a lively dinner table and they wouldn’t change it for the world. Ruth is President of the Board of Trustees of Shelter Our Sister (SOS), Bergen County’s shelter for victims of domestic violence.
How can my readers buy your book?
Readers can find Ruth’s books at:
Carina Press HERE
Amazon     Barnes and Noble

a Rafflecopter giveaway
Posted by Nancy Lee Badger at 12:30 AM