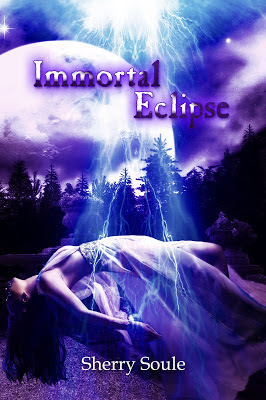 By Sherry Soule
My Thoughts:


The story starts in present day New York City and follows Skylar Blackwell, who loves name brand fashions, and is a major shoe-addict. She claims to be quite insecure about her appearance, which makes her believable.

She loves living in her tiny apartment with closets filled with top-of-the-line outfits (did I mention that she adores shoes?) As a photographer, her life is perfect, until her boss gives her a rather harsh kick in the pants. A change of scenery after the death of an uncle, and a mysterious letter, sends her to the Pacific coast and her inheritance; a ghastly structure. Dark, dank, and far from anywhere, it is jokingly called Summerwind.

She meets several of the staff, who either stare at Skylar, or dismiss her as an inconvenient blip in their living-out-in-the-mysterious-boonies lives.

The exception is Dorian Delacroix, a man who exudes a remarkable likeness to one of the dark portraits that cover the walls at Summerwind.  As caretaker, he is a hunk of brooding male who makes sparks spring to life inside Skylar. She soon learns that Dorian is a collection of imperfections, and she does her best to ignore his smoking-hot body, odd mannerisms, and secrets…even when he kisses her senseless.

The story twists and turns with suicides that could be murders, ghostly apparitions, and horse rides along the cliffs. The characters are quirky, the mansion is weirdly intriguing, and I found the heroine easy to like.

Skylar wants what most of us want; a normal life, a picket fence, and children with a man who adores her. She finds anything but. I lost myself in the budding romance, and the story contained enough spookiness to keep me reading until the very end.

IMMORTAL ECLIPSE is by Sherry Soule, released by Disenchanted Publishing in ebook and print.

When her uncle is brutally murdered, and the cops seem uninterested in following up the case, Skylar journeys to California to seek answers. Her search for clues is soon overshadowed by haunting nightmares of a young woman also murdered in the house.

Now the inhabitants of Summerwind are mysteriously dying, leaving no evidence as to how or why, and Skylar finds herself in a deadly race against time to expose the killer--before they strike again.

Armed with only wit and Pradas, Skylar begins questioning the servants, but the growing list of suspects includes the sexy and brooding caretaker, Dorian Delacroix, a man desperately trying to forget his tragic past. And a major distraction for Skylar.

Determined to play detective--instead of the fashion police--and unravel the dark history of the mansion, Skylar is plunged into an otherworldly mystery that not even she can explain away. As the boundaries between reality and dreams blur, Skylar's greatest challenge is to stay alive long enough to learn the truth.
IMMORTAL ECLIPSE
AMAZON Kindle    Kobo
Barnes and Noble    Amazon UK
*Nancy Lee Badger received a free ARC in order to review this book for the benefit of her readers. No other link exists between her and the author, Sherry Soule
Posted by Nancy Lee Badger at 1:00 AM