My secret: I love a man in a kilt. Okay, maybe it’s not such a secret. When I set out to write the first book in the Highland Gardens series, I ran into a historical problem. I wanted my Highland men in kilts and I wanted the stories to take place before, during, and after the Battle of Flodden.

My problem: The first recorded mention of a possible belted plaid or great kilt was in 1578. The earliest picture from sometime after 1600. The Highland Gardens series of novels begin in 1506/1509, with the Battle of Flodden taking place on September 9, 1513—soon it will be the 500-year anniversary. So, the historical purest would say my Highland men shouldn’t wear kilts.

My solution: Stretch the truth. Use literary license. Who’s to say the kilt wasn’t worn before it was mentioned or pictured in someone’s writings? My Highland men wear kilts. Can you forgive me?

What is a belted plaid or great kilt? A length of tartan material from 4 to 5 yards long. (Possibly 2 lengths of 25” wide fabric sewn together.) The reenactors I’ve seen at Highland gatherings in the US lay the plaid on the ground and fold it into pleats. They lie down on it, wrap the ends around themselves, and fasten it with a wide belt. I’ve seen some young men take a considerable amount of time to fold the material just so, but I doubt the original wearers fussed overmuch.

If you’d like to learn more about the early history of the great kilt and how it’s worn, read Matthew Newsome’s article.


Do you prefer your Highland men to wear kilts?


What’s next for you?


Just Once in a Verra Blue Moon, the second book in the Highland Gardens series, is scheduled to release in September 2013.


Just Beyond the Garden Gate, a Highland Gardens Novel

The Scottish Highlands—a place where faeries and brownies and other fae creatures dance through time. On occasion, so do mere mortals.

Determined to regain her royal status, a banished faerie princess accepts a challenge from the High-Queen of the Fae to unite an unlikely couple while the clan brownie attempts to thwart her.

Passion ignites when a faerie-shove propels burned-out business consultant Laurie Bernard through the garden gate, back through time, and into the embrace of Patrick MacLachlan. The arrogant clan chief doesn’t know what to make of the lass in his arms, especially when he recognizes the brooch she wears as the one his stepmother wore when she and his father disappeared.

With the fae interfering at every opportunity, the couple must learn to trust one another while they battle an enemy clan, expose a traitor within their midst and discover the true fate of the missing parents. Can they learn the most important truth—love transcends time?

Journey from the lush gardens of the Blue Ridge Mountains of North Carolina to the Scottish Highlands of 1509 with Just Beyond the Garden Gate. 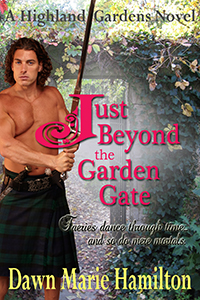 Excerpt
Laurie opened her eyes a crack. Her head pounded, her pulse raced. This wasn’t good. Those couldn’t be two, huge, leather-clad feet inches from her face.

She opened her eyes wider. Raised her gaze higher.

Those feet—the ones that couldn’t be there—was it possible they were attached to two muscular calves wrapped in soft napped animal skins?

Farther up, she took in all of the man who towered over her. Piercing blue eyes blinked. Crinkles appeared in the corners. He was grinning. Not outwardly. The perfectly shaped lips remained tight and straight, but something within this gorgeous man was pleased.

She gasped with recognition. This was her man, the one from her heated dreams and visions. The man she didn’t believe existed. The man who made her insides flip-flop.

Unsure what had just happened, she gave her head a firm shake. Mistake. Dizziness hit in waves. She swallowed hard. When the nausea passed, she pushed her palms against the ground and rose to her feet. Unsteady, she swayed. The stranger’s image blurred.

Large calloused hands gripped her arms. A strange though familiar jolt of energy coursed through her, causing her heart to beat too fast.

He quickly released her. He must have felt it too.

Again, she swayed. She reached for his support at the same time he took hold of her upper arms.

She blinked to clear her vision and moistened dry lips. The flash of desire in his eyes made her shiver. He smiled for real this time, leaned forward, placed a hand behind her head, and brushed her lips with his. Gentle at first, then with vigor, his tongue delved into her mouth.


A little bit about the author


Dawn Marie Hamilton dares you to dream. She is a 2013 RWA® Golden Heart® Finalist who pens Scottish-inspired fantasy and paranormal romance. Some of her tales are rife with mischief-making faeries, brownies, and other fae creatures. More tormented souls—shape shifters, vampires, and maybe a zombie or two—stalk across the pages of other stories. She is a member of The Golden Network, Fantasy, Futuristic & Paranormal, Celtic Hearts, and From the Heart chapters of RWA. When not writing, she’s cooking, gardening, or paddling the local creeks with her husband.
How can my readers buy your book?
AMAZON       Barnes and Noble
How can they find out more about you?
WEBSITE     BLOG    TWITTER
Amazon Author Page


Giveaway: $5 Starbucks e-gift card to one commenter.
****Please leave your name and email address. Winner will be drawn on Tuesday June 18th
Posted by Nancy Lee Badger at 1:00 AM