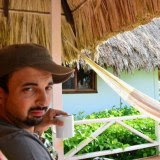 My guest today is author Alex Granados. His book, Cemetery Plot is a horror/sci-fi farce and was released on October 31st.


Please tell my readers a little bit about your book.
I like to call Cemetery Plot a horror/sci fi mashup. I can say that because it has two tropes of both genres: zombies and time travel. But more than anything else, what I was trying to do was tell an interesting story. The book has two intertwined stories. In the first one, the world is overrun by graveyards. A virus, transmitted through the ashes of the cremated, necessitates a law banning cremation. As a result, grave space is at a premium, and in place of the strip malls of today, cemeteries have taken their place.


In this setting, our protagonist, Vanessa, wakes from a decades long sleep. She participated in a satanic ritual to turn her into the living dead, but it didn’t work. Instead she wakes up alive, human, un-aged and miserable. A cemetery tycoon finds out about her and is convinced that he can study her and find a way to raise the dead. If he can do that, he can make room in his cemeteries for more bodies, and, in the process, make more money.


That’s the first story. The second one, which alternates chapters, is set in the future of the first story. In this future, a zombie apocalypse has taken place. A living dead medium is the protagonist. He can speak to zombies, and he cons rich people into paying him for communicating with their departed loved ones.


These two stories merge at some point, and you find out how they are inextricably linked.


Scary thought, but you look so relaxed in your photo. Is this the only genre you write in?
I hadn’t really intended to write a horror novel for my first book. It just came out that way. I write in any genre. I’ve completed a few other manuscripts, some fantasy, some crime and I think one science fiction, so I’m an equal opportunity writer.


Diversification. I like it! When did you start writing toward publication?
I started last November (2011) for National Novel Writing Month. (aka NaNoWriMo) I had never completed a novel, and I decided to give it a go. By the end of the month, I had two 25,000 word stories that I combined to form Cemetery Plot. Then I decided to try to get it published.
Did you have several manuscripts finished before you sold? If so, did you send them out yourself?
I actually only had the one finished when it sold. I did send it out myself to numerous agents and publishing companies. After many many rejections, my current publisher accepted my manuscript.


Why have you become a published author?
I’ve always wanted to be a novelist. From the time I was in fourth grade, and my Halloween story was voted best by the rest of my class. That was my first taste of popularity, and I never forgot it.


Do you have any rejection stories to share?
Not really. They all uniformly suck.


I feel for you. I have kept them all. What is your writing routine like?
Ever since last year’s National Novel Writing month, I’ve made it a habit to write 2,000 words a day. I do that until I’m done with a rough draft, and then I try to edit 20 pages a day until I make it through. Then I repeat that over and over again until I’m done.


Who first introduced you to the love of reading?
My mom took me to a bookstore and I saw the cover a book called Castle Roogna by Piers Anthony. It had a dude with a sword on it or something, and it looked interesting. My mom bought it for me and it sat on a shelf for a couple of years. Then one day, I picked it up and fell in love with the story. I ended up reading almost all the Xanth books by Piers Anthony. I was hooked on reading from that point forward.


Who influenced your decision to become a writer?
My sixth grade teacher Mrs. Drawbaugh (I think that’s how you spell it) gave us an assignment to write a short story. We turned them in. Later that day, she came and got me out of Home Ec. She demanded to know if I had received help from my parents. When I told her no, she said I was talented and that I should be a writer for a living. That’s what really put the idea in my head.


What sort of promo do you do? Do you have help?
I tweet, post on Facebook and Goodreads, and I have my own blog. I’ve done numerous blog interviews, set up through my publishing company, and I’ve done one radio interview. I’m really struggling with the whole self promotion thing and am always open to advice.


Having achieved your goal to be a published author, what is the most rewarding thing?
Getting my book in the mail. Seeing the beautiful cover with my name on it was all the reward I ever wanted.


Even in this age of all-things-digital, there is nothing that compares to holding YOUR book in your hands. What do you see ahead in your writing career?
More novels! I keep writing them. I’m also actively pursuing a literary agent.


Are you a member of any writing organizations and, if so, have they helped?
Not currently. I do subscribe to Writer’s Market.


Will you share some encouraging words for authors still struggling for that first contract?
I’ll give you the advice that another writer gave me, more or less. If you can quit writing, do it. It’s frustrating, hard and often minimally rewarding. But if you find you can’t quit. If you just have to write. Then do it consistently and never give up. Write every day. Keep sending stories out. Just don’t stop.


Good advice. What’s next for you?
My novel Into the Cave will be released April 1 from Crushing Hearts and Black Butterfly Publishing. 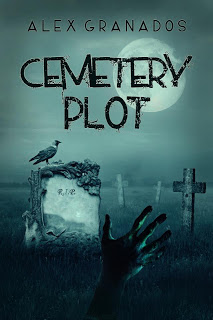 Vanessa Hawthorne is a zombie. . .at least that was the plan. Miserable with her life, she agreed to participate in a fatal ritual that would transform her into one of the Living Dead. Instead, she wakes up decades later alive, unaged and living in a world overrun with graveyards.


But when a real estate tycoon finds out about Vanessa, he will stop at nothing to discover how she cheated death. He hopes that this knowledge will give him the power to resurrect the dead. The money he stands to make is incalculable. And he is willing to do whatever it takes — kidnapping, assault and even murder — to get the job done. Luckily for Vanessa, she has Mark Nimocks and his friend Emily to protect her. . . but at what costs?


A zombie apocalypse is in the works, and it will take a medium from the future to find a way to undo the end of the world. But can he actually help change the past? Or is the world fated to be destroyed no matter what?


Excerpt from Cemetery Plot
“Hi. My name is Nathan Mickels. I guess I could tell you about the end of the world, and being one of the last remaining humans on earth or some of that apocalyptic crap. But the truth is that the world hasn’t changed much since it ended. Sure, the dead are walking and people are dying. But there’s still money to be made.


“Take me for instance. I specialize in a particular trade. You see, these Living Dead, they’re not the brightest creatures. Any mother hoping that her little Annie was going to come back and sit at her knee had a rude awakening. Little Annie was much more likely to bite her and turn her into a zombie than give her a hug.


“Nevertheless, people find out that the dead are coming back to life, and they just got to see. That’s where I come in. It’s my job to hunt down the Living Dead. Specific ones. If your uncle Andrew died last year, you might hire me to find him and bring him to you. Of course, if you were smart, you already checked out the graveyard. You probably only come to me if you find a hole where your uncle should have been.


“So out I go, and I track down your uncle. But what good is he going to be to you as a grunting hulk of shit for brains? None, that’s what. I have a unique talent that I get paid for. I’m kind of like what people used to think mediums were like. You know, they figured they could talk to the dead and all that crap. Well, I can talk to the dead. It takes some doing and some concentration, but leave me alone with a walker for a good six hours, and I can start getting something intelligible out of them.


“Mind you, it’s not what you’d think of as intelligible, but it’s a language of sorts. Some kind of guttural, grunting and wheezing that resolves itself into meaning in my head. Well, you don’t believe me? Ask me anything? How old was Uncle Andrew when he lost his virginity? What did he really do to lose that sales job? Was he really just being friendly with his niece that time you caught them together in the bedroom? (Here’s a hint. No. You ought to kill that bastard all over again.)


A little bit about the author
Alex Granados is a producer for The State of Things on North Carolina Public Radio WUNC and the North Raleigh News Columnist for the regionally acclaimed News & Observer newspaper. Cemetery Plot is his first novel.


Alex received a degree in journalism from the University of North Carolina at Chapel Hill. He also has a minor in philosophy, which basically means that he used to think he was really smart but realized he wasn't in time to switch majors.


Fishing, reading science fiction, watching crazy movies, walking his dog Zoey and late night dance parties with his wife are some of his favorite hobbies. Alex still doesn't know what he wants to be then he grows up, but he is holding out for astronaut.


How can my readers buy your book?
EBook at Amazon
Print book at  Amazon
You can find more information about Alex Granados and Cemetery Plot at
AlexGranadosWrites@blogspot.com
Twitter     Facebook    Goodreads
Posted by Nancy Lee Badger at 1:00 AM