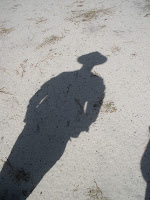 Jayne sipped her coffee and grimaced while her


sister, Marti, laughed. Jayne ought to apologize, but


the burnt coffee smell—accompanied by the charred


Christmas was right around the corner. Marti couldn’t


kids ate well, but she rarely found the strength to


visit the supermarket or cook a wholesome dinner. A


deep weariness had replaced the bouts of depression


that tainted her bereavement.


Not much of an improvement, she thought.


“Sorry. I appreciate the effort.”


“Just wanted to impress you with my newfound


culinary skills.” Marti smiled at her joke. She ran long


fingers through her short, dark red hair. Her digital


camouflage ACU did little to enhance her skin tone,


or her figure. The bulging pockets of her trousers and


the washed-out green-gray of the weather resistant


fabric detracted from Marti’s pale skin. Only the tiny


freckles that peppered her petite nose heralded their


commissary has everything we need for a great


Marti pulled open a cupboard door and grabbed a


large jar filled with a candle. After she lit it, she


placed it between them on the table. The scent of


pumpkins and cinnamon wafted up, obliterating the


evidence of her attempt to cook.


“Jayne, I’m glad you came for the holiday. We’ll


have fun at my good friend’s wedding on Christmas


“God. Christmas will be here before we know it.”


“Your nephew and I feel more alone during this


holiday than any other time of year. Can’t I talk you


into moving in? Permanently?”


“I do miss living on an army base, but Johnny’s


“Sorry. I forgot. However, things change, sis. You


you’ll meet another great guy. Think about it?”


Jayne sighed. She’d love to get back into army


life. When her less-than-stellar marriage faltered


after the birth of their second daughter, she and


Johnny received a needed break when he deployed


overseas. The kids missed their dad, but thrived


under her care. The stress-free home life was like a


breath of fresh air. With no one breathing down her


neck to get dinner on the table, ordering her to run


errands, or treating her like a thorn in his side, things


had started to look up.


Then her world imploded the morning two officers


knocked on her door. Since losing Johnny, she


and the girls had lived through two years of hell;


leaving the base, finding a new home, hiring sitters,


and completing her degree in nursing. Worse, the


man she truly loved remained a distant memory. A


memory she had never found a way to shake.


alongside his platoon. Along with two other drill


and now neared the end of their advanced individual


with intense survival instruction before sending them


off into the world with their new skills.


exhaust mixed with pine scent from the North


Carolina forest surrounding the army base. He swore


he smelled the tang of the sea, though it was over


one hundred miles to the east.


Several of the men chuckled as they marched. The


frigid weather under clear skies had put everyone


in a good mood. Too good. Perhaps a ten-mile hike


would give them all a good night’s sleep.


filled with gunfire and blood had gotten to be a habit.


He’d awaken covered in sweat with a curse on his


lips. This proved tiresome. With Afghanistan a recent


memory, he woke today determined to enjoy a march


on paved roads under an American sky. No guns, no


blood, no bodies laying dead and dismembered in the


“What’s that, Sarge?” his second-in-command


“Nothing. Just thinking out loud. Quiet today. No


“Why drive when you can march? The sun is real


head back, and smiled. “I could get used to this.”


have my boys run down.”


16A2 rifle off his shoulder, and trotted into the next


road. The platoon marched in place until waved by.


Several clapped their hands together for warmth as


their hazy breaths danced in the chilly breeze. Noses,


on several of the men, had grown rosy from the cold.


base was easy and safe.


of kids, I’d have something to look forward to each


day, he thought as he caught up, and then trotted to


the front of the platoon. An image sprang up, clear as 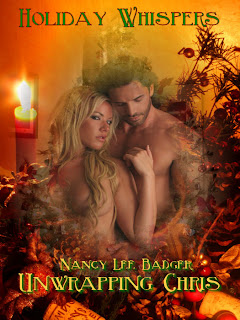 UNWRAPPING CHRIS, by Nancy Lee Badger, was released by Whispers Publishing and is a contemporary military romance. Ring in the holidays with excitement and spice!
Buy Links:
Amazon   NOOK   AllRomance    WhispersPub
Posted by Nancy Lee Badger at 10:13 AM