I'm From ANOTHER WORLD (the soap opera) 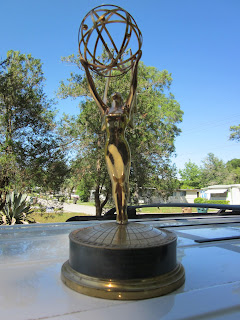 I have been traveling back and forth from my home in North Carolina to help out with family in Florida, and I recently made a side trip to visit an old friend. Not that he is any older than me, of course, but he did live two doors down from me back in Huntington, NY and we graduated elementary, junior high, and high school together.

Joseph Rothenberger had a special man for a dad...Joe Senior...and the older Mr. Rothenberger took pity on an eighteen-year-old neighbor. I hadn't yet found a summer job, that summer after my freshman year of college. He said he could get me a day's work at NBC, where he was a producer.

Now I had not, until that point, been much of a soap opera watcher (if you don't count Dark Shadows) but even I had heard of Another World. So, off we went in his chauffer-driven car toward New York City. Don't ask me where the studio was, but I enjoyed the lovely neighborhood since I walked around it with other actors during our lunch break.

Other actors? Yes, I was hired to work as an on-air actor in a non-speaking role! I played a hospital Candystriper, and pushed open the double doors in a fake hospital corridor. Two 'real' actors followed right behind me.

It took all day to record the one-hour show. I received a check for $50, which was a fortune (later that summer I earned $25/week as a camp counselor) I could work no more than one day since I did not have an actor's card, but that was okay.

I still have the script for the show with various hash-marks and I amazed other dorm mates when I sat and read along with the script when the show aired in early 1972. (Yeah, I'm an oldie but goodie)

What has any of this to do with my life? I never wanted to act, but found that a one day stint on a popular television show helped me when I worked in retail, served in a restaurant, or fielded emergency calls as a 9-1-1 operator. Each job, over the years, went smoother because I became what they wanted of me. Today, I am who I want to be, which is why I write books.

Getting back to Joe... I drove the 80 or so miles across Florida to his home in Ocala and finally met his lovely wife, Kathleen. She has helped edit several of my books, and it was great to put a face to the voice. When she and Joe gave me a tour of their studio (they create advertising videos and the like) I spotted from the corner of my eye something large and gold.

When he brought it closer, my eyes widened. I held an Emmy his dad had been awarded for...GET THIS...

Another World!
Eerie considering all the shows the man produced. I got Kathleen and Joe to let me take photos to remember a small, ancient part of my life that made me the bullsh*tter I am today...no offense.
Posted by Nancy Lee Badger at 7:17 AM