My alter ego has been just as busy. I also write for Whispers Publishing as Nancy Lee Badger. I have a Scottish paranromal with them called DRAGON'S CURSE, but an opportunity came about when the editors at Whispers called for short stories that included a Christmas wedding. I came up with a contemporary romance that fit the bill! I worked on it, submitted it, and waited. Five days later, they bought it! Here is a small blurb to whet your appetities! 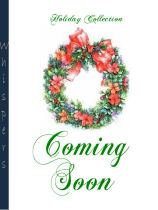 Army widow Jayne Rockwell searches for a secure future for her and her two daughters. Staff Sergeant Christopher Hawkins regrets leaving young Jayne eight years ago to go off to war. A crash encounter a week before Christmas thrusts these two lonely people back into each other’s lives once more.

Jayne must learn to trust a man who disappeared with her heart. Chris must overcome the guilt of taking her innocence, and then leaving her heartbroken and alone.

A Christmas wedding brings them closer when Jayne spies him as a groomsman in Highland dress, complete with kilt. He cannot keep his eyes off the woman in green velvet wearing a wedding ring. Accusations, explanations, and remorse leads to a love that erupts among candlelight, Christmas carols, and a dark room. Who needs mistletoe?

UNWRAPPING CHRIS will be released by Whispers Publishing on December 3rd. Visit their website at www.WhispersHome.com to download.
Posted by Nancy Lee Badger at 11:37 AM