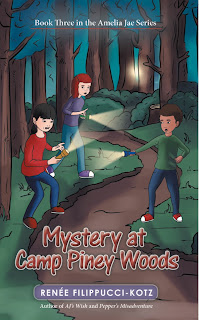 I am happy to again host fellow Raleigh, North Carolina author Renée Filippucci-Kotz. Although I write romance and she writes children's fiction, we are both members of the Triangle Association of Freelancers. I am eager to share her new children's book that was recently released in print. Take it away, Renée!

Mystery at Camp Piney Woods is the third book in the Amelia Jae series. AJ is going to camp for the first time. While she is packing, her cousin calls to tell AJ there are strange noises and lights in the woods around the camp. Her cousin doesn’t say what is scaring the campers, but suggests there may be a ghost in the woods.

“Amelia Jae,” her mother called up the stairs. “Telephone for you.”
“I’ll get it in your room,” she called back as she walked to her parent’s bedroom.
“Hello?”
“AJ, this is Courtney. Are you ready for camp?”
“Yes, I’m all packed.”
“I called to say have a good time and don’t let the weird stuff up there bother you,” Courtney laughed.
“What weird stuff? What do you mean?”
“Didn’t you hear?”
“No, I didn’t.” asked AJ.
“Well, there are some strange goings-on in the woods. Some people think there’s a ghost in the woods. Maybe there’s a ghost or maybe there’s something worse in there,” said Courtney.
“Well, I don’t believe in ghosts. You can’t scare me. I’m not afraid. It may be an animal or something else in there. There’s no such thing as ghosts.”
“Okay, but a friend of mine was there last year and he said a lot of the campers were scared. He said some of the campers said there were strange noises and lights in the woods. Just thought you should know. Well, I have to go. Have fun. Bye!”
AJ stomped back to her bedroom gritting her teeth. Her hands were balled into fists. “Ohhh, Courtney makes me so mad,” AJ muttered to herself.  “She’s always trying to scare me. She thinks I’m a baby because she’s two years older. I’m no baby. One of these days I’m going to get her back really good.”
AJ stomped her foot again in frustration, but before she could think of a way to get back at Courtney, her mom walked into her bedroom.
“What’s all the noise up here?  I could hear you all the way in the kitchen. What’s wrong?”

“Courtney said there’s supposed to be something scary in the wood. She said there may be a ghost in the woods around the camp. I don’t know why she tries to scare me. I know there’s no such thing as ghosts. I’m not a fraidy-cat.”
“I know you’re not afraid. Do you want me to call Aunt Dorothy about her?”

“No,” AJ sighed.
“Honey, we heard about the rumors. You know Dad and I wouldn’t let you go to camp if there was any danger,” she said as she brushed a lock of AJ’s red hair behind her ear. Sometimes your cousin, Courtney, doesn’t know when to stop her teasing.”
AJ just shook her head.
“I know,” AJ said. “I know there’s no ghost. Maybe I’ll find out what’s really out there.”
“Now Amelia Jae, I know you.  Once you get an idea into your head you don’t let it go. You listen to me. I don’t want you to wander off by yourself and get into trouble.”
“Okay,” said AJ. However, her thoughts were already on the camp and what she would find out.
BUY LINKS
Amazon     Books-a-Million 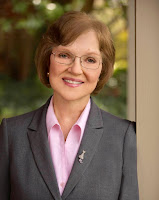 ABOUT THE AUTHOR
Renée Filippucci-Kotz was born in New York and grew up in Kentucky. Renée developed a passion for books and animals as a child. Going to the library with her parents and brother was a favorite pastime. She has always loved to read. Growing up Renée had a vivid imagination.  She loved to make up stories. She would tell stories to the children for whom she babysat and the children at day camp where she was a counselor.

She became interested in writing for children while working with foster children. Her first children’s chapter book, AJ’s Wish, was published in 2016. Her second chapter book in the AJ series, Pepper's Misadventure, published in 2017, received honorable mention in the Carteret Writers Contest. In addition, she has published her first picture book, Booker and the Stinky Smell in 2017, and her second picture book Smokey and Clover the Runaway Goat in 2018.

Renée recently completed the manuscript for her third picture book, Cody to the Rescue. To be published later this year.  She is currently working on a middle grade novel, tentatively titled Mark of the Dragon. When not writing, Renée enjoys reading, gardening, traveling, volunteering at her local animal shelter and spending time with her husband and pets. Ms. Filippucci-Kotz lives in North Carolina. connect with her here: