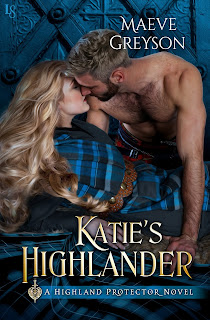 First off, I’d like to thank Nancy for welcoming me to her blog today to chat about my newest release, KATIE’S HIGHLANDER. A time travel romance from Loveswept—a Penguin Random House Imprint. This book came out just last week on January 22nd. It’s the third installment of my Highland Protector Series about a family of tenth century druid Highland warriors brought forward in time by the goddesses to protect an ancient relic fabled to keep hope and love alive in the world. This book is the third son’s, Ramsay MacDara’s, story.

Ramsay is recovering from the humiliating sting of a gold-digger’s touch and has decided to be a solitary druid. But the gods and goddesses have other ideas. Ramsay is needed back in the past and they’re not about to send him alone. Katie Jenson is an archeologist on sabbatical from Princeton. She wrecks her car on MacDara land, but that wild ride is nothing compared to a jaunt back to the year 917 A.D. with Ramsay. History takes on a whole new meaning and becomes both heart and home.
Blurb:

An archaeologist with a zest for life finds herself stranded in small-town North Carolina—with a brooding Highland hunk who’s straight out of ancient Scotland.

Ramsay MacDara wishes the goddesses had left his arse back in the tenth century. That way he never would have met the gold digger who made a fool out of him. A loner at heart, Ramsay is riding his beloved horse through the woods near his family’s North Carolina theme park, Highland Life and Legends, when he hears tires squealing—followed by a thud—and rushes to the scene to help. That’s when he sets his eyes on a pair of long legs sticking out of the moon roof of a car. His interest piqued, the rest of her will soon arouse his greatest desires . . . and deepest fears.

Archaeologist Katie Jenson is on a six-month sabbatical from her job at Princeton University. Following the death of her beloved father—whose dying request was for Katie to live life to the fullest—she’s headed to a friend’s beach house in North Carolina. But a momentary distraction takes her off the road and on the journey of her life . . . with a sex god in a kilt at her side. Ramsay’s passion is the stuff of legend—and it just may be Katie’s greatest discovery.

Get KATIE’S HIGHLANDER at these retailers or wherever ebooks are sold:

Damn. He’s right where he belongs.
The certainty hit her as soon as she saw him. Hit. Her. Hard. So hard, she caught her breath and froze in the archway opening into the great hall.
Ramsay stood on the dais at one end of the cavernous meeting room that sprawled the length and width of the keep. The great hall, as it was known by all, comprised the center core of the stronghold—and Ramsay now reigned supreme over it.
Formidable. Imposing. Arresting. All those adjectives fell short when it came to describing the mesmerizing man who had obviously not only found his element but totally embraced it.
He clutched his spear at his side like a king—no like a Greek god, like Zeus himself holding his scepter as he surveyed Olympus. A different breastplate from the one he’d worn earlier covered his chest. This one reminded Katie of the one Ramsay’s father had worn back at the altar. Highly    polished iron and brass pieces shaped into what she was certain were meaningful symbols were inset into the piece of thick leather armor that had been dyed black and oiled to a fine sheen that reflected the light from the torches and the candles.
Wide stance. Broad shoulders thrown back. Head held high. A heart-stopping leader overseeing all his subjects. When his piercing gaze landed on her, Katie swallowed hard and an involuntary shiver of damn rippled through her. This wasn’t Ramsay, the sweet, hesitant introvert of Brady, North Carolina. This man was Ramsay, the fearless warlord.
He smiled. A real smile that proudly shone from his eyes, then he held out his hand and waited.
A gentle but firm push nudged at the small of her back. “Go to him, m’lady,” Flora whispered from behind her. “Dinna fash, I’ll be a standin’ to the side of the pedestal if ye have need of the slightest thing.”
Oddly enough, the knowledge that the mere slip of a girl that she’d just met would be nearby did make her feel somewhat better.
Katie stepped into the room and the rumbling undertone of the multiple conversations evaporated, leaving behind a nerve-jarring silence. She swallowed hard and kept her focus locked on Ramsay as she made her way to the dais and took his hand.
“Yer breathtaking,” Ramsay said as he beamed at her with a look she’d never seen on any man’s face before. It was a shiver-inducing mixture of pride, adoration, and pure primal hunger. He steadied her as she navigated the pair of wide stone steps of the dais, assisting her struggle to keep her long skirts from grabbing her feet and throwing her to the ground.
He kept his gaze locked on her face as he met her on the middle step and pressed his mouth close to her ear right before she’d reached the top. “Truly breathtaking, dear one, and yer all mine.” 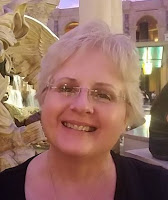 More about the Author

"No one has the power to shatter your dreams unless you give it to them." That's Maeve Greyson's mantra. She and her hubby of almost forty years traveled around the world while in the U.S. Air Force. Now she's settled in rural Kentucky where she writes about her beloved Highlanders and the sassy women who tame them.

Find Maeve at these places: