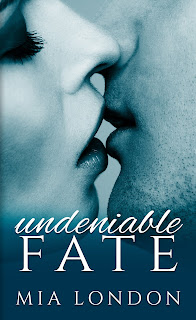 Mia London stopped by to share intimate details and an interview with a certain sexy character in her new book Undeniable Fate, which was published December 26th. Take it away, Mia!

About this book: This originally appeared in the steamy anthology called Blame It On Fate. As I wrote, I fell in love with these characters and knew this had to be a series. Although Undeniable Fate has an HEA, I knew these characters were not done. I’m thrilled to announce Undeniable Love (book 2) is on pre-order now.


The story is about a man and woman (Brandon and Lily) who happen to meet on a plane ride to Rome, Italy. Later, the hotel in Rome accidentally double-books her room, and Brandon walks in. She was in the middle of something, and it doesn’t take Brandon to realize it. And so it begins.

Interview:
We are so pleased to have with us Brandon Morgan, president and chairman of Laurel Medical, Incorporated.

Press: Welcome. So glad you could take time from your busy schedule to chat with us.
Brandon: Thanks for having me.
Press: First, I’d like to start be asking about Laurel. You recently took over the running the company from your father, yes?
Brandon: Yes, in a way. My father had a heart attack—
Press: I’m sorry to hear that.
Brandon: Thank you. As I was saying he had a heart attack. Prior to that my sisters and I were vice-presidents. My father had us work our way up in the company, learning all we could. Now, I have the title of president, but truly it’s a joint effort with my sisters.
Press: That’s impressive. You must get along well with your sisters to work side-by-side with them every day.
Brandon: [He grins.] We do get along for the most part.
Press: I read that you’ve recently acquired Corticelli Labs, based in Rome, Italy.
Brandon: That’s correct. We saw some great synergy between the two companies, not to mention gaining entree into the European market.
Press: This is the first acquisition for Laurel, yes?
Brandon: That’s correct. So far the team is doing an excellent job of transitioning Corticelli into the Laurel fold. I expect no loss of jobs. Just some reassigning of roles in Italy.
Press: I’m sure they were happy to hear that.
Brandon: [He nods.] There are several trends in healthcare that Laurel and Corticelli are acutely aware of. Whether it’s artificial intelligence, Block Chain, which relates to the flow of health information, an aging population, or disease management. The success of Laurel depends on expansion and growth in ways that address these issues smartly.
Press: Excellent. So let’s shift to your personal life. Tell us what we are most wanting to know. Are you seeing anyone? Miami Monthly named you
most eligible bachelor last year. Nice compliment.
Brandon: [He smiles.] Thanks. I am seeing someone. It’s not always easy because I work a lot. Running a Fortune 1000 company is not for the faint of heart. Just in the short time we’ve been sitting here, my phone has buzzed four times. I won’t talk too much about my girlfriend to protect her anonymity, but I will say this. She came into my life in an unexpected way. She threw me for a loop. She is kind, understanding, and beautiful- inside and out. I cannot keep my eyes off her. At first, I denied that we could have a relationship, but we do and it’s working. And I feel so tremendously blessed.
Press: Are there wedding bells in the future for you two?
Brandon: That remains to be seen.

Blurb from Undeniable Fate
Was it fate that the hotel in Rome double-booked her room and he, of all people, walked through the door?

Project manager Lily Bennett dreads the trip to Italy for she suspects a pink slip awaits her return. Fate brings her fantasy man alive when Brandon enters her room by mistake. Kiss by kiss, he breaks down her insecurities making the next four days the best (and hottest) of her life. But when she dares to hope for more, he becomes distant. Now, to forget this man she knows so little about, who’s turned her world upside down.

Brandon Morgan is driven, successful, and wealthy. Handed his father’s company at thirty-six, he is not about to let his family, his employees, or Wall Street down. His company’s latest acquisition will prove he can handle anything thrown his way. He just hadn’t planned on the encounter of a lifetime with Lily. He craves for her like a heart needs to beat, but a relationship is absolutely out of the question.

Meet Mia:
Mia loves to write!
She’s been reading fiction for years and finally decided that the images and scenes floating around in her head needed to make it to paper.

She’s a huge fan of romance, highly optimistic, and wildly faithful to the HEA (happily ever after). She’s inspired by most anything around her. And her biggest obstacle is not having enough time to get it all down on paper (or computer, as the case may be).

Her goal is create a fantasy you will enjoy with characters you could love.

She lives in Texas with her attentive, loving, super-model husband, and her perfectly behaved, brilliant children. Her produce never wilts, there are no weeds in her flowerbeds, and chocolate is her favorite food group.

And then she wakes up.

*Don't forget to enter this Giveaway brought to you by Mia and a group of wonderful writers!