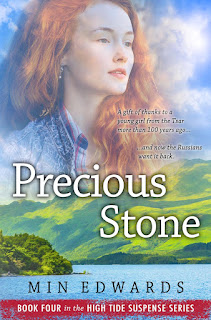 Precious Stone is Book 4 in the High Tide

This Romantic Suspense is by Min Edwards

A gift of thanks to a young girl from the Tsar more than 100 years ago... and now the Russians want it back.

Collee McCullough, the owner of The Bakery in Stone Bay, Maine, has a perfect life until early one morning men in suits come calling. She has something someone dangerous wants. Something that her Russian great-grandmother Natasha took when she fled Russian in 1913. Too bad Buka never told her son or anyone else what she had or where she left it.

Jake Elsmore, visiting Stone Bay to sell his mother’s house, walks into The Bakery for a cup of Earl Grey tea, but gets more. There she is. Stepping out from behind the Chief of Police, a lovely, fiery-haired fairy toting a shotgun while two men lie insensate on the floor of her shop. Looks like that tea will have to wait

“Stop right there. My brother is the police chief. He comes in about this time every morning to pick up his coffee. He’ll kick your ass then throw your skanky butt in jail.” This was a load of hogwash because Stone Bay didn’t have an actual jail. Collee McCullough’s brother, Nick, processed prisoners quickly and transported them to the sheriff’s department in the county seat. The only cell was his spare office, which he kept bare of any furniture except a chair and a card table. He called it his conference room. The Stone Bay Police department was relatively new, and Nick had only been the chief for a little more than eighteen months. However, a jail extension on the police/fire department building on the hill was planned to begin in a month. She didn’t think this situation could wait a month though.
“Colleen Natasha Onegin?” The bigger of the two men asked with a small crooked grin, almost sinister-looking.
“No, Collee McCullough. You must have the wrong woman.” Yes, her name was Colleen Natasha, but who the hell was Onegin?
“I don’t think so, my dear,” the man growled low in his throat as he came closer.
She kept her eyes glued to him but noticed in her peripheral vision her brother stepping up onto the sidewalk just outside the door. He saw the interlopers because he gave her a wink, the rat, and nodded his head slightly. Then she watched him slowly reach for the handle on her front door.
In the next moment, that front door slammed open shattering the glass, hitting the second man who’d remained at the entrance in the back and throwing him across the room. Chief Nick McCullough stormed through the destroyed door, gun drawn, a menacing look on his face. “Get back to the kitchen, Collee. I’ll take care of this.”
She didn’t have to hear another word. Her brother was beyond tough, serving four tours in the military police in Germany, Iraq and Afghanistan. He could take care of her and anyone else in his sphere with his hands tied behind his back, and by the story she heard from him one night while he was, as they say, in his cups, he’d once done just that.

BUY IT AT AMAZON


Min Edwards wears many hats... author, book designer, archaeologist, and citizen of the edge of America... Lubec, Maine, the most eastern town in the U.S. She’s a life-long reader and loves almost equally romance, suspense, thrillers, sci-fi. If a book takes her someplace she’s never been with a story that makes her heart beat with excitement, then she considers that an excellent book. She strives for the same excellence in her own stories.
Her first novel, STONE BAY, a Contemporary Romance, was published in March of 2014. It was followed by a new Romantic Suspense series, Hide Tide Suspense, bringing danger to the small village of Stone Bay, Maine. Out now in the series are STONE COLD, STONE HEART, STONE FALL and PRECIOUS STONE. Finally, for the conclusion of the series, THE RUSSIAN PHOENIX, a women’s fiction historical and the prequel to PRECIOUS STONE is coming soon. These books can be found on her Amazon Author Page
Follow her on her website blog page for her writing thoughts, and at Twitter @MEdwardsAuthor her Facebook page, her Personal Pinterest, and her Author Pinterest Page.