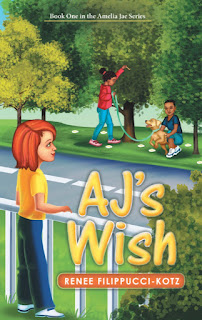 I met author Renée Filippucci-Kotz at a meeting of my local writer's group, the  Triangle Association of Freelancers. When I heard that she had recently published her first book, I wanted to learn more.
Take it away, Renée!

I wanted to write books for children since working with foster children in the late 1980’s. In addition, I am a long-time volunteer for the Wake County Animal Center. Cassandra, the inspiration for AJ’s Wish joined my family in 2009.

Book Blurb:
AJ loves animals.  She enjoys playing with her grandma’s pets and the pets of her friends, but her greatest wish is to have a pet of her own.  After AJ and her family watch a TV program about homeless animals in shelters, AJ asks her parents for a pet.  When they say no, AJ sets out to prove she is responsible enough to care for an animal.

AJ loved to visit her grandma’s farm. There were two cats on the farm who would not go near anyone—no one, that is, except AJ. AJ fed them, and they trusted her. They even let her pet them. AJ named one Blackie because he was black and the other Graybe because she was gray. One morning, AJ heard a bird screeching. She ran outside and found a bird between Graybe’s paws. Without thinking, AJ reached down and plucked the bird free.
“Naughty kitty!” said AJ as Graybe meowed and ran under a bush. The bird didn’t wait a second and flew away into a nearby tree.

What is next for you, Renée?
I plan to write a series of books about Amelia Jae, more commonly known as AJ. Pepper’s Misadventure is soon to be the second book in the series. 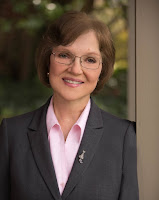 More about the Author:

Renée Filippucci-Kotz has loved books since she was a child. Going to the library with her parents and brother was a favorite pastime. Renée has been telling stories to children since she began babysitting around age eleven. AJ's Wish is her first children's chapter book.

Growing up Renée and her family had a variety of animals including gold fish, dogs, turtles, a cat, and a rabbit. In 2001 she began to volunteer at her local animal shelter, the Wake County Animal Center.  Renée currently produces videos of their pets in foster homes and takes photographs of animals in the Center for their web page.  She also produces videos for various rescue organization to help with their adoption of animals into permanent homes.

Ms. Filippucci-Kotz lives in North Carolina with her husband, Art, two dogs and a cat named Cassie, the inspiration for AJ’s Wish.