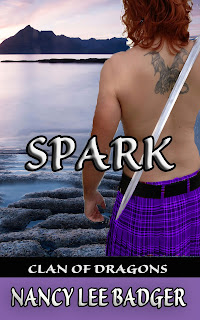 SPARK is the first book in my Clan of Dragons series. My readers will let their imagination take them to the paranormal world where dragons live within the very real Black Cuillin Hills on the island off the Scottish coast called Skye. Using a harsh yet beautiful location gives my characters the perfect setting for dealing with humans, pirates, and even a nasty wild boar. I should mention that my love of horses played a major role in inserting them into the story.

The next book in the series is SMOKE and will soon also be available for pre-order. It will be followed by SMOLDER, giving my readers more characters, more intimate scenes of romantic love and of course, more pirates and wild beasts.

Here is an excerpt from SPARK, Book #1, Clan of Dragons:

Evan stared into the heavens while a gust of bitter wind ruffled the scales along his tail. The morning sun was making its way slowly upward, forcing the stars to disappear, while a heavy fog hid the earth, far below his perch. A heaviness filled his scale-covered chest, as well, because the news hurt. The future of their kind was in jeopardy.
Days earlier, Cliona had died. When in the form of a red doe, a human hunter had brought her down with his deadly arrow, ending Dougal’s chance at happiness. Dougal and Cliona were lovers, and his oldest brother had only recently realized that she carried their unborn dragon offspring.
Two lives lost.
Two very important lives.
Cliona was the last breeding female of their kind, and their offspring would have meant that the dragon clan of the Scottish island of Skye would endure.
From a peak somewhere above Evan, Dougal roared. The deep mournful howl reminded him of rolling thunder, which was probably what villagers would assume caused the sound. Evan and his remaining brothers hid from humans in the stony perches of Skye’s Black Cuillin Hills. They lived in caves beneath the sharp peaks that rose west of the Scottish Highlands surrounded by the sea, and across the narrow channel of the bay. The hills were home for more years than Evan could recall.    Their numbers had dwindled due to the weather, accidents, and the occasional hunter. To his knowledge, no humans knew they shared this area of Skye, but they crossed paths when in their other forms.
The freedom to shape-shift into forest animals meant a lot to his brothers. Dougal enjoyed shifting into a red stag, and running free though the trees and meadows. Wynn was partial to wolves, whose numbers had decreased as steadily as their dragon clan. Their environment was changing too fast, and dragons faced an uneasy future. “We be on the brink of extinction.”
As Dougal landed beside him, his talons scraped along the bare rock surface, and the mountain shook. Large pebbles rained down on their middle brother, Wynn, who growled but did not move from his lower perch. Dougal sighed, and Evan kept silent. Letting his brother talk first was safer. Dougal’s eyes glowed like angry flames, as red as his scales. His mood was as black as the wings he slowly folded over his back. Dougal’s newfound hatred toward humans was teetering on all-out war. Evan didn’t feel he was in the wrong, but talking with his brother while Dougal was in pain was dangerous.
SPARK is now available for pre-order
exclusively from:


Add me to your 'WANT TO READ' Library on GOODREADS
*and if you want something you can read TODAY, download this 4-author Boxed Set
WHEN LOVE CONQUERS TIME, 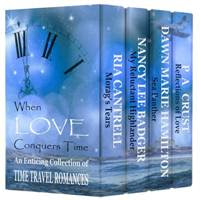