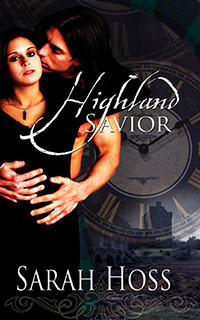 Sarah Hoss stopped by to share some intimate details about her, and her latest book. HIGHLAND SAVIOR is a historical paranormal romance and was released on July, 22, 2015. Please tell us more! Did you have several manuscripts finished before you sold? If so, did you send them out yourself?

Sarah- No, I had two manuscripts finished and signed them within a month of each other. But, from the time I started writing to the time I signed a contract was 7 years. I had to learn the industry and the trade first. I sent them out myself.

Sarah- I have bookmarks and magnets I like to give out. I also have lovely people like you who host me on their blogs.

Nancy- Are you a member of any writing organizations and, if so, have they helped?

Sarah- I am a member of RWA, Crossroads of America Romance Writers, and Celtic Hearts Romance Writers.  Each organization has been very helpful as they contain such wonderful and knowledgeable people.

Sarah- Be patient. This is not an industry to rush. It takes time to make your book the best it can be.

1) I’m a “bonus” baby. My siblings are 13, 12, and 7 years older than me.
2) I danced in the Pan Am Opening Ceremonies held in Indianapolis, Indiana as a teenager.
3) I love camping, Christmas, and the smell of burning leaves.

Sarah- I am working on the fjurd brothers story.

Two Lifetimes – Two Hearts – One future, if they can only survive the past.

Hamish Macpherson is surrounded by turmoil: an arsonist is on the loose, he’s in the middle of a feud with a local clansman, and just as he’s trying to save his sister from a burning cottage, he appears in the middle of a foreign living room three hundred years past his own time.

Gillian Meadows thinks she’s self-sufficient and can handle anything until she witnesses a murder in the alley next to an Olde City tavern. In a desperate run to escape being the next victim, she stumbles into a wiccan store and accepts the help of the shop owner. Little does she know that one mis-spoken word of a simple incantation can change everything.

Neither world is safe, but Hamish can better protect Gillian if he returns to his own time. Gillian has no choice but to go with him if she wants to escape the danger closing in. Little do they know that his past could be the biggest threat of all to their future.

Excerpt from Highland Savior
“Cadal gu sèimh, aghráidh.” He closed his eyes as a tear slid down his cheek. Sleep in peace, love.
Hamish rolled to his stomach and gathered his footing. This couldn’t be happening. Athol’s hand snaked out and gripped his wrist.
“I’ll send my daughter to fetch Callum and stay with their children. He should be here.”
Hamish nodded his head and watched as Athol ran off toward his daughter. Quickly, his focus turned back to where the house had once stood. How could this have happened? How did this nightmare become his reality? He covered his eyes with his fists and rocked back and forth, crying. His shoulders shook with it. His anger and sadness knew no bounds. He stood, wobbly on his feet at first but found his footing, and watched the cottage burn. His mouth was drawn tight and he breathed deeply threw his nose, making short, loud breaths. Friends and relatives stood also, watching, buckets of water still in their hands, as the boards gave way to the fire and broke, caving in. Embers flew into the sky like fireflies dancing in the breeze.
Two thoughts came to his mind at once- Alexander and James. He didn’t think he was strong enough to tell them, but he knew he had to before they found out from someone else. Where was James?
As if thinking his named had conjured him, James ran to Hamish.
“Brother, tis sorry that I am to hear of yer home and fields.” He pulled back and stared Hamish in the eyes. “We will help ye rebuild and get back on yer feet.” He searched his brother. “Are ye injured then?”
His heart stopped beating for a moment. He didn’t know.
His throat felt thick and he tried to swallow. He needed to  gather the courage needed to tell James the ugly truth. He rubbed a hand over his mouth then brought it to the back of his neck.
He took a deep breath and blew it out. Tears welled in his eyes and he wiped them away with the back of his hand. “Brother,” he coughed, his throat hurt and his voice was strained, “Margaret was in the house.”
“Did she become injured? Is she all right?” James searched the clearing for her.
Hamish closed his eyes for a moment and let out the breath he had been holding. He opened and closed his fists over and over. “Nay. She’s gone.” Fresh tears flooded his eyes and for a moment he couldn’t see. Margaret was the gentlest person he knew and he loved her dearly. James stood staring at him for a moment before turning his gaze to the burnt rubble of his home. He let out a roar then broke down and Hamish held him. Together, they cried for the loss of the sister they loved.
James and Hamish rode their horses in silence to Alexander’s farm. Neither wanted to give the news alone.
They found their brother in the pasture grooming a new colt. The saw the excitement on Alexander’s face as he spotted them and watched as he ran over to the fence where they tied their horses.
“James and Hamish, how good it is to see ye.”
They glanced at each other and Hamish waited as James, being the oldest, spoke.
“Where is Marlana?”
Alexander glanced around the yard before remembering. “She went to the woods to check the rabbit traps.”
“We need to talk to ye.” Hamish and James jumped down from the backs of their horses and led them to the fence to tie them up.
Alexander followed, then took a big sniff of the air. “Why do the two of ye smell like a campfire?” He studied them, tugged on Hamish shirt where the ends were frayed and burnt. “Ye look like shit. What’s happened?”
The two brothers peered at each other for a moment, then turned their attention to their brother.
James moved toward Alexander. “Hamish’s home was set afire and burnt to the ground this evening.”
Alexander stole glances between the two of them in disbelief. “I’m sorry to hear it.” He reached out a hand and gripped his brother’s shoulder.
James placed his hands on his hips and glanced down at the ground for a moment. There was no easy way to say what needed to be said, but he must. “Alexander.” He chanced a glance his brother. Anguish etched his features, his heart breaking all over again. His sister, beautiful, sweet Margaret. A tear slid down his cheek. He stared at the heavens, praying for the strength to so this.
Alexander turned to face him. Confusion and then fear flashed in his eyes.
“Margaret was at Hamish’s home. We couldna get there in time to save her.” He choked on the last sentence. His throat felt thick, his head ached.
“What?” Alexander shook his head. “What are ye saying? She’s dead?”
“Aye,” Hamish said. 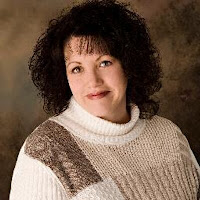 AUTHOR BIO:
Sarah Hoss grew up believing she could try anything and if she set her mind to it, she would succeed. Sixteen years of dance lessons, Cheerleading, and school plays proved to her that her parent’s words rang true. Writing was no exception. Reading the Outlander series made her fall in love with time travels and the historical places books could take her. Always a child with a vivid imagination, she realized as an adult, she could put her imagination to good use and began writing. Marrying her very own hero, they live in Indiana in the town where she grew up. They have three beautiful children and one hyper dog. When Sarah isn’t writing, she enjoys gardening, camping, and watching her kids’ play sports. Where to find Sarah-

Posted by Nancy Lee Badger at 2:00 AM