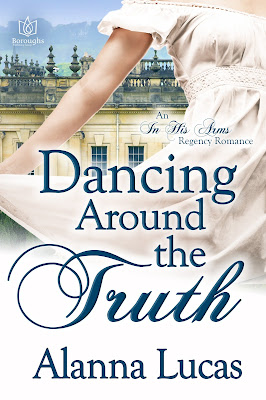 Alanna  Lucas stopped by to share some intimate details of her life as a writer, and to talk about her new book. Dancing Around the Truth is a historical romance set in the Regency and was released on July 23, 2015. Please tell my readers a little bit about your book.

Alanna- Dancing Around the Truth is the fourth book in the In His Arms series. After Philippa created all sorts of havoc by eloping and enlisting her sister to cover for her in When We Dance- the second book in the series, I decided that Philippa’s story needed to be told.

A little teaser:
Dark secrets, lies, and a far too enticing widow threaten to destroy the orderly world Benjamin Weston, the illegitimate son of the late Baron Albryght, has made for himself…and Mrs. Philippa Keates might just also hold the key to unlocking his heart.

Nancy- Did you have several manuscripts finished before you sold? If so,did you send them out yourself?

Alanna- I had two manuscripts finished (which are currently under my virtual bed making friends with imaginary dust bunnies), which I had sent out * mumbles into her hand * times before entering Boroughs Publishing Group’s ‘What’s in a Name’ novella contest. My road to publication began with winning that contest.

Alanna- I am an organized panster. I always begin by journaling character names, scene ideas, and sketch anything that influences that story. The journal goes everywhere with me. Once I have a clear picture in mind, I begin to write- sadly, never in chronological order. My daily writing routine varies depending on kids activities and real-life obligations, but I am always thinking about the story.

Nancy- Will you share some encouraging words for authors still struggling for that first contract?
Alanna- Connect with other writers, take classes, enter contests, and don’t be afraid to take chances. Good luck and happy writing!

Nancy- Please Share three fun facts about you that most people don’t know.
1) I play the piano
2) I studied Art History in Paris, France
3) I homeschool my two kids

Alanna- I’m excited to be part of an anthology entitled Once Upon a True Love’s Kiss with some amazing authors that will be released in January 2016.

SECRETS & LIES
Mrs. Philippa Keates thought she’d found her happily-ever-after when she eloped, but two years and no children later she is named a widow. Then a woman claiming to be her late husband’s wife appears, and Philippa demands answers.

AND LOVE
Benjamin Weston, the illegitimate son of the late Baron Albryght, has made a name for himself conducting investigations for those willing to pay a high price for discretion. When a childhood friend shows up on his doorstep, begging for his assistance, Weston fears most of all that she will discover the truth…and thus bring further scandal to herself, the only woman he has ever loved. But as he unravels her mystery, as secrets of his own begin to come to light, soon it becomes clear that there is more at stake than just Philippa’s reputation—and nothing less than her heart.

Excerpt
“I...I wanted to...apologize for what happened in the stables.”
“You have no need to apologize,” Weston said with quiet emphasis.
“But I acted like a child, sobbing because...” Philippa turned away, she could not bear to look at him and confess her fears. “I could not muster the courage to ride.”
“You never have to apologize for anything.” She turned back toward him and met his gaze. Weston took a step closer. “It just might be too soon, but never believe you are a coward. You can do anything you put your mind to.”
That was not what Philippa was expecting to hear. The sound of her heart pounding ricocheted in her ears as his sheer strength surrounded her, comforted her. It was more intense than what she had felt that afternoon when he held her.
Philippa suspected that the emotions were one-sided. Continuing with her rehearsed speech, she sputtered at a rapid pace, “It was quite unladylike for me to make such a mess of your shirt.”
“Philippa,” Weston whispered her name as he closed the distance another inch. His warm breath caressed her cheek.
For reasons she couldn’t explain, she did confess one of her fears. “I feel like my life is over,” she murmured into the darkness, unsure how Weston would react.
“Your life is not over.” He was standing mere inches from her. Leather and countryside invaded her senses, stirring sensations in places she did not know existed.
“It’s not?”
“It’s only just beginning.” Weston’s words cascaded across her cheek; his hot breath was like an aphrodisiac. She wanted more, oh dear lord, she wanted more.

Nancy- How can my readers buy your book?

Alanna- Readers can go to the publisher’s home page HERE

Alanna Lucas grew up in Southern California. From an early age, she took an interest in travel, incorporating those experiences into her writing. When she is not daydreaming of her next travel destination Alanna can be found researching, spending time with family, or going for long walks. Alanna Lucas is a member of the Romance Writers of America.

Amazon Author Page
Posted by Nancy Lee Badger at 1:00 AM

Email ThisBlogThis!Share to TwitterShare to FacebookShare to Pinterest
Labels: Alanna Lucas, author interview, Dancing Around the Truth, on writing romance